It’s Saturday night and we have our friends Simon and Tina over for dinner. In between bites of tacos we’re discusing our plans for the rest of the weekend. I have to turn down Simon’s invitation to a pick-up game of ultimate frisbee on Sunday because Kay and I have made tentative plans with some other friends to visit a town north of Kaohsiung in search of a fireworks festival. Tina says she’s been to the festival before, but that she probably doesn’t need to do it again. She also tells us that if we go we’ll need to wear motocycle helmets.

“What for?” I ask. I’d heard very little about the festival and was putting off doing a web search until I knew for sure that we were going, but  certainly didn’t anticipate needing a helmet to attend.

“For protection against the fireworks,” says Tina.

Now I’m confused and thinking about all my previous firework  experiences: numerous Fourth of July celebrations, carnivals, the Minnesota State Fair, the Busan International Fireworks Festival in Korea. I don’t recall needing protective head gear for any of them.

Maybe the Taiwanese have different, more sinister versions of fireworks than what I’m used to. Maybe the festival is a town-wide Roaming Candle war pitting visitors and tourist against the locals. Maybe “fireworks” is an incorrect English translation and the meaning is closer to “gunpowder” or “dynamite.” Who wouldn’t want to visit a Taiwanese dynamite festival?

The next day I do a quick web search and discover that every year on the 15th day after Chinese New Year visitors flock to the town of Yanshui to be repeatedly shot by hundreds of bottle rockets.

The Yanshui Fireworks Festival (widely considered to be one of the most dangerous festivals in the world) stems from a cholera outnreak  in the late 19th century that nearly wiped the small town out. The citizens of Yanshui called upon the Chinese god of war, Guan Dong (also called Guan Di) to help fight the the disease by carrying his statue around town on a palanquin while shooting off  fireworks every step of the way. The epidemic receded and the locals have been paying homage ever since by annually reenacting the pyrotechnic exorcism.

The highlight of the festival revolves around the sporadic lighting of “beehives” –large structures built with wood or steel, laden with thousands of bottle rockets connected to a single intertwined fuse. Once lit, rockets fire in all directions and festival goers donned in motorcycle helmets and coveralls gather around and allow themselves to be pelted.

Kay and I decide to visit the festival with some friends, but opt out of being bombarded with fireworks. In fact, of the four people in our group only our friend Jenna (author of the blog Nomad Notions) is brave enough to join the rocket fodder. We hop a train to Tainan City then continue by taxi to Yanshui. We don’t make it more than 5 feet out the car before  hearing the rumble of fireworks in the distance.

The streets are lined with food vendors and local shops have tables set up with scooter helmets, gloves, safety glasses and other rocket protection gear for sale. the air smells like rotten eggs and the entire town is under a heavy blanket of smoke. Dim pulsating lights can be seen flickering through the smoke overhead and groups of people wearing matching coveralls with burn stains are roaming around–no doubt in search of the next beehive explosion.

We stroll towards the center of town stopping sporadically to sample street food and buy beer. There’s not a lot to do for those uninterested in pyromania, but families still gather for photo ops near a creek littered with glowing ornaments of different sizes, and to send  the occasional prayer lantern floating into the sky. It’s been about two hours since we arrived and we still have yet to witness the lighting of a beehive. We’d gotten word that a large one was set to go off at 10pm, but when that was pushed to 11 (and later, 11:30) we followed others who claimed to have knowledge of one being lit a few blocks away.

Anticipation mounts as the large contraption is rolled into the middle of the street and a fellow who’d clearly been chewing betel-nut all night encourages all the foreigners who want to get blasted by the bottle rockets to be doused with water beforehand to avoid their clothes catching fire. As with many small towns in Asia, the large group of foreigners draw a lot of attention and many of the locals are taking pictures with several expats who have added themes to their protective gear (big shout-out to Captain America).

Waiting for the Beehive to be lit. 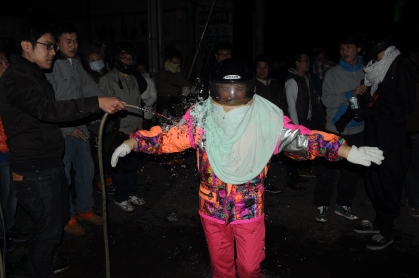 Participants have water sprayed on them to avoid catching fire.

I snap as many photos as I can then retreat to what Kay and I think is a safe  distance–20-30 yards from the beehive, behind a parked car. They parade the palanquin of Guan Dong around the premises and the crowd quiets as the fuse is lit.

When it starts the first few shoot straight up into the air and rain down sparks onto the entire scene. Then row after row of the rockets fire directly into the crowd, causing those in the front to dance and turn away in an attempt to dampen the force of the barrage. As the fuse travels through the frame the smoke thickens and only long streaks of light left in the wake of the rockets are clearly noticeable. None of them have shot in our direction yet so I rise from the hiding spot (fully exposing my head) to take some photos. By now everyone close to the beehive is hopping around trying to cover the more sensitive areas of their bodies and the entire street looks like an astronaut rave in the middle of a meteor shower.

I whip out my iPhone and begin recording video hoping not to catch a bottle rocket to the face, and a Taiwanese gentleman appears at my side gesturing for me to follow him to a better vantage point. I crouch down and scurry behind him, feeling like a solider scrambling into a foxhole for cover. As he ushers me into a nearby tent (turns out it’s the same tent where they were storing the beehive) two rockets go off near my head and I give up on the recording. I’m way too close.

Luckily I end up next to a couple who have gotten ahold of some cardboard and together we hunker down behind it.  After a few minutes the barrage of rockets shifts to a different direction and I’m able to make my way back to the previous shelter behind the car. It’s been ten minutes since they lit the damn thing and it’s still going strong. Some people emerge from the crowd to take a breather and bat out the flames on their clothes before retuning to the onslaught.

When it’s finally over we emerge from our shelter and search for Jenna and some other friends to inspect for injuries. There’s a few burn holes and a mangled umbrella, but no one is hurt and everyone is wearing a wide grin. Beers are drank and we take some time to enjoy the fireworks that are being shot overhead instead of into the crowd.

Captain America took one for the team.

We watch a couple more beehives explode (one made to look like Sponge Bob and the other shaped like a tea pot) before calling it a night and heading back to Kaohsiung. It’s 1 a.m. but some people are just arriving as the festivities will continue until 4. I’m secure in my decision not to join in on the action, but pledge to partake next year. It’ll be two hours before we make it back home–plenty of time for my ears to stop ringing.

*Author’s note: If you’d like to read about Jenna’s recount of her experiences on the front lines, you can do so here.