I’ve written about some of the issues Taiwan has related to race and ESL eduction and I try to carry the flag in bringing awareness to this problem here in Kaohsiung, but alas there is still work to be done.

I recently came across this in one of the textbooks I teach out of:

In this particular book the characters are visiting New York and apparently saw fit to visit the Bronx where you can see black kids with afros and cornrows break dancing in the street, every afternoon.

What was probably a guileless attempt by the school (one of the larger chain schools in Taiwan that publishes it’s own curriculum) at introducing students to different English speaking cultures (in this case, black American culture?), comes off as uneducated and offensive. I’m surprised that a company so obsessed with providing a well rounded learning experience could be so off base. This is a wholesale buy-in of the shitty American stereotypes that have made their way across the ocean and found new homes within the Taiwanese global psyche.

I stare at the pages in disbelief before thinking about how I can skip over this part of the dialogue, but the dialogue is an extension of the grammar pattern to be taught in the next section and will need to be memorized and recited. The kids will learn it whether I teach it or not.

I decide to have a quick conversation about what’s on the page. This is a class of eight to ten year-olds so I try to make it as simple as possible. I explain to them that despite what their book says, “Ricky” needs to comb his hair every morning just like they do. This is difficult for them to understand because they know Teacher Jay doesn’t comb his hair and as far as they’re concerned Teacher Jay is the same as Ricky: black and with hair different from their own. For my students there’s nothing separating blacks from other blacks (regardless of where their respective countries); just blacks from Taiwanese. So not combing ones hair becomes a defining feature of all black foreigners. This mistruth is then used to stress the grammar pattern being taught in the textbook:

Does Ricky comb his hair every morning?
No, he doesn’t
Does he dance every afternoon?
Yes, he does.

I see this and immediately think of the experiences I had on arrival while searching for a teaching job. Wrestling with the widely accepted view that blackness is this weird otherness that cannot survive outside of only being “the other.” There’s little difference between this and my difficulties finding teaching work the first few months on the island. In both situations, blanket stereotypes left unchecked have become the common truths from which to hang opinions. The end result is that people are only able to relate with those perceived as “other” through differences instead of through similarities, and in Taiwan, difference is sometimes met with adversity. Inserting these stereotypes into an ESL textbook is dangerous in that they become perpetual, further strengthening faux  truths for Taiwanese students about people who are different from them.

In  conversations with other expats on forums and in person, I’ve fielded the opinion (multiple times) that nothing can be done about this; that there’s no use in trying to change local opinion; that foreigners have it good in Taiwan and I shouldn’t complain. That because most schools are only concerned with maintaining a revolving crop of eager English learners (i.e. maintaing a steady cash flow) they’re reluctant to change anything and reasonable complaints unnecessarily stir the pot.

Fuck that. When I open up a textbook and see something like this, 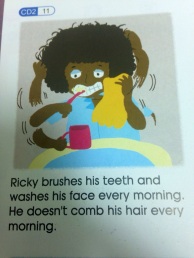 I’m more inclined to curse someone out than reluctantly dismiss it as acceptable. I find it hard to believe I’m the only foreign teacher who’s seen this and thought it inappropriate, but it’d be easy to assume that few (if any) teachers actually voiced opinions about it.

That being said, I still believe the best attempt at  combatting these hiccups in intercultural understanding is through added exposure to the cultural facets of foreigners in Taiwan–instead of only the language (that the two are often separated is odd to me). Most of this shit comes from western cultural texts so I feel we shoulder some of the responsibility to help sift through the bullshit. Talk with students and coworkers about why it’s not acceptable to snicker or make snide comments about different types of foreigners, but also take the time to highlight cultural similarities when opportunities present themselves. If there’s an opinion or idea expressed that is based on a cultural untruth, set it straight instead of waiting until later to bring it up when you’re safely entrenched among other expats.

A little cultural respect goes a long way. We can start by speaking out and having more of it for ourselves.