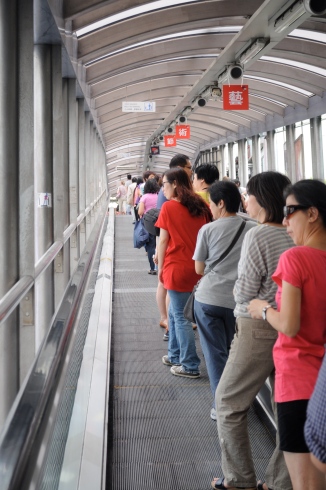 Hong Kong is awesome for people watching. You get a little of everything. Merchants and businessmen, international students, fashion models, expat teachers, wealthy retirees from all over the world, travelers and locals all moving about in a hurried, jumbled frenzy, in a mega city of just over 7 million.

Being the nosey person that I am, I hold a special affinity for good people watching. You’ll see someone and think “what the hell are they doing?” or “I wonder where they’re from” or “Damn, that lady has some fucked up teeth.” It’s wholesome fun for the curious soul.

If Hong Kong is the best place for people watching in the world, then the Central-Mid-Level escalators are its raison d’être. This series of covered escalators and moving walkways spans over 2600 ft. and climbs a height of nearly 450 ft. up Victoria’s peak–connecting the Central  business district to Mid-Levels, a tiered maze of high rise apartment buildings resembling Manhattan or Tokyo. The system carries an estimated 60,000 passengers per day.

I’d first read about the elevators while planning our previous trip to Hong Kong. They brought up images of 10-year-old me racing my brother up an escalator in the wrong direction or dance-walking at the entrance, before the conveyor belt turns into a step (yes, I was THAT kid.). Not that I planned on doing the same in Hong Kong, but I could. The escalators are included on many Hong Kong to-do lists, but few go beyond mentioning them as a “free” and “if-you-have-time” activity.

I viewed the Central-Mid-Level escalators in the fuck-yeah-I-wanna-do-it activity and let it be known that I wasn’t leaving Hong Kong until I saw them firsthand. This is even before I knew they had Guinness World Record status as the longest series of escalators in the world.

We’d reach a point in the day when a decision on what to do next had to be made and I’d float the idea of swinging by the escalators. My suggestions weren’t exactly met with enthusiasm, and I realize that a grown man excited about riding escalators is probably repulsive, but you needn’t be seeking cheap thrills to enjoy the Central-Mid-Levels. For one, the route (from Queens Road in Central to Conduit Road in Mid Levels) is lined with chill  bars and restaurants carved into buildings just out of arms reach from the escalators. Seating is outward facing so you can sip a cocktail or glass of wine while watching a never ending conveyor belt of people glide by–a sophisticated real life version of The Jetsons. Some establishments even place thigh high wooden tables in the walkway parallel to the elevators. The message: no need to sit;  just stop and have a drink. Brilliant. 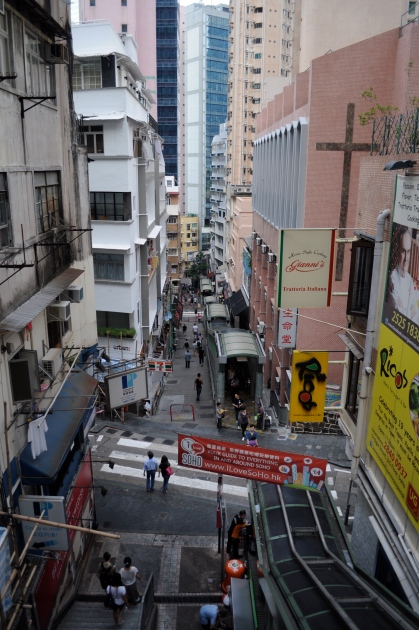 Hop off the escalators on Hollywood Road and peruse the nearby antique shops and art galleries. If you visit within the next couple of months, you can swing about the Graham Street wet market (Gage St. exit) for good photos and traditional seafood. Sadly market vendors may be closing down for the last time in March as the 170 year-old market will be demolished to make way for more high-rises. If you miss out on the Graham Street Market  you can still find a few vendors in the alleys and lanes around Wellington Street.

We make it to the escalators after a morning spent recovering from a night out in Lwan Kwai Fong and an afternoon at Chunking Mansion with its mob of Indian restaurant owners. We have time to kill before we need to meet up with friends in Mong Kok. I figure we’ll ride the escalators to the top and make our way back down on foot stopping for a drink or two and maybe checking out some antique shops, then catch the famous Star Ferry Back to Kowloon.  It’s 3:30 and theres a steady stream of people headed up, but it’s no too crowded; mostly tourists ascending through the narrow column of shop windows and loudly colored signs.

And the people watching is stellar.

On Shelly street two guys are exiting the elevator barefoot, wearing nothing but board shorts and carrying surfboards (still tethered to their ankles). My guess is that their were coming from nearby Big Wave Bay, but they could have at least put a damn shirt on.

There’s a guy jogging down the stairs in workout clothes near Cain Road. Helluva place to go for a run, buddy.

We decide to grab window seats at a small bar just as happy hour starts. People begin to pour off the escalators and onto bar stools and curbside chairs near tables that are just big enough to fit two drinks. It gets darker and Hong Kong’s iconic skyline begins to glow. A group of twenty-somethings is talking loudly behind us, two business men have beers at standing-only tables on the sidewalk and my Stoli martini is arctic cold. I take out my phone to snap an Instagram, then abort plan.

Another bar just down the hill has modestly priced mojitos and front row seats to the escalator. We give up on the idea of visiting antique shops. Cold drinks in the in the shade of skyscrapers is a powerful weapons against Hong Kong’s summer time heat.  I’m pissed we that we have to meet up with friends in an hour.

There’s a family held up on the steps across from us. Mom has a glass of white wine, dad looks to be two or three beers in and their baby is happily kicking away time in it’s stroller.I contemplate riding out the rest of happy hour bar-hopping our way back down to Central. If only the drinks were a little cheaper.

The area isn’t as rambunctious as Wan Chai or Lwan Kwai Fong, but I was happy to take it easy and after a day of poking around the city.

My suggestion for the Mid-Levels: Do all your sightseeing and market scavenging early in the day then hit up the escalators in the evening (your feet will thank you).

Have a drink, people-watch the weirdos, grab dinner in SoHo (the area south of Hollywood road) and plan the rest of your night.

*Budget Tip: Drinks and food can get expensive. Swing by a 7-11 to grab snacks and libations, then park it on the large steps by Shelly street, just opposite Yorkshire Pudding. All the fun for half the price. For cheap(er) food options check the small alleys around the escalator exits and entrances or hit up the smaller concentration of bars and restaurants between Elign Street and Cain Road. 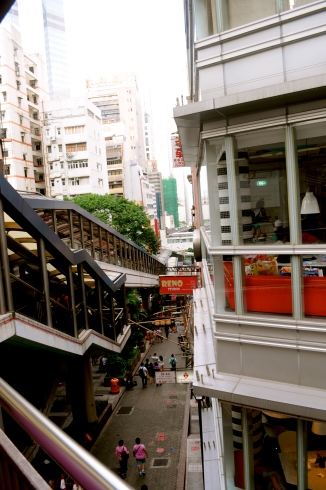 How to get there:
Central MRT stop exit E2.

Keep in mind that the escalators only run uphill from 10:15 to 12:00 AM. If you’re too tipsy to make it back down via the stairs, Take the Green Minibus back to Central from Conduit road near the escalator exit or grab a taxi.