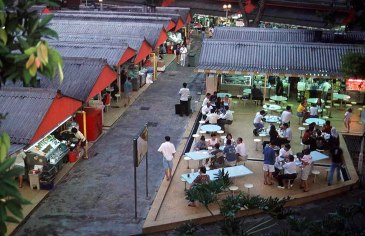 Singapore. The tiny island nation that could; a mega mash-up of Chinese, Malay, Indian and Eurasian influences; a blank canvas of sorts for the ultra wealthy and if you’re there on a lengthy layover, a foodie playground for vagabonds with fat kid tendencies.

When faced with less than 24 hours in Singapore, ditch the shitty must-see list you copy and pasted from Trip Advisor or elsewhere on the interwebs and focus your efforts on working your way through the diverse range of food offerings.

You won’t be able to try everything. There’s too much. Attempting to tackle it all too quickly could result in a mad dash from one district to the other with nothing to show for it besides a destroyed palate the bubble guts.

I scored two long layovers in Singapore on trip to Cambodia last summer (shoutout to Tiger Air) and like a chump, carefully plotted a route through several districts and several of Singapore’s famous hawker centers looking to get bent on shameless gluttony. This of course meant dragging my girlfriend around the island looking for “The Best” of everything, passing up plenty of local dankness along the way. No doubt there were a couple of meals that aren’t worth the digital space I pay WordPress for (shoutout to banana flavored Hi-Chews–BANANA), but once I kicked the idea of seeking out “The Best,” my search got a helluva lot less stressful and the food a helluva lot better.

Rather than jab you with a twenty-bulleted index of food-stuffs to go tramping around Singapore for, here’s three plates that I’d order again if given the chance and that can be found nearly anywhere on the island. Just look for the lines of locals. If everyone in the place looks just like you, chances are you might as well be eating at McDonalds.

On appearance, Singapore’s oft touted “national breakfast” looks more like dorm room slop. She may not be the prettiest, but she’ll take care of you in the morning and will most likely be there when your drunk ass comes stumbling onto the food court after a long night out. A healthy spread of kaya (a thick curd of coconut milk, eggs and sugar) sandwiched between crispy crustless toast and paired with two soft boiled eggs seasoned with salt, pepper and a few shakes of soy sauce; it’s straight crack, homes. If Singapore made it illegal, people would still sell it under bridges and in dark alleys. Expats and tourist would ask for it using code names. “Yo, you know where I can score some breakfast bricks and jelly beans?”

Throw in a hot cup of Kopi (coffee, typically served with sweetened condensed milk) and you’re set. I spotted plenty of locals dipping their toast in the egg yokes, but make sure you give the kaya its due respect by enjoying a solo piece.

We found ours at a small hawker center behind the Boon Keng MRT station, but you can get  kaya toast at pretty much any kopitiam (traditional coffee shop/cafe) in Singapore. Some ratchet up the swank more than others, but you should’t pay more than SGP $4.00-4.50 regardless of the establishment.

A cantonese classic gone global, wanton mee has about as many variations as there are countries in East Asia. Eaten as a soup or dry, Hong Kong serves it in steamy fish broth with shrimp and scallions, Thais take it with plenty of chili and sometimes a flick of sugar, Filipinos have a version with mung bean spouts. Similar to Malaysia, Singaporeans tend to serve the wantons in a soup completely separate from the noodles, but in Singapore you might come across a version that includes a thin chili sauce resting in the bottom of the bowl. Almost all are are accompanied with a few slices of char sieu (barbecued pork).

We’re in the middle of a to-eat-or-not-to-eat debate over durian when my girlfriend spots  a stall offering wanton mee just off Sims avenue in Geylang. “Isn’t that on your list?” She knows I already have a specific place in mind for wanton mee, but her tone is clear: drag me to another district for some damn noodles, and you’ll be dining alone.

We sit down and look over the menu options posted in front of the stall. There’s wanton mee dry, wanton mee soup, laksa and steamed pork wantons. I go for the dry and look on as the chef is painfully meticulous in preparing the dish, coating the bottom of the bowl with a deep red chili sauce, ridding the noodles of any moisture by hoisting the straining basket above his head several times before depositing it’s contents into the shallow red puddle along with the char sieu and leafy bits of cai xin. The side of wanton soup was nothing spectacular, but the noodles–in that sauce–crushed it. Enough spice that you’ll need periodic gulps of tea, but not so much that it robs you of the noodles and seared pork. It’ll run you SGP $4.00.

A hundred food blogs will tell you a hundred different places to find wanton mee in Singapore. I’d suggest letting that sexy red chili sauce be your guide. Anywhere you find it is worth sit down. 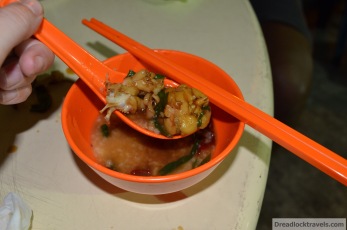 I can’t knock a person’s reluctance to eat amphibians. I’ll hardly pretend that frogs, or salamanders are somehow more appealing proteins than chicken or pork because, if nothing else, frogs and salamanders have barely enough meat to justify the effort it takes to cook them. It’s for this reason that I couldn’t believe how wildly popular claypot frog is amongst native Singaporeans and and transplants alike. Many offbeat foods rose to delicacy status out of necessity: at some point in the past, due to poverty or famine, (usually both) people started eating weird shit because it was either that or starve. Singapore isn’t necessarily hurting for cash or good cuisine these days–haven’t been for a while, so that people still line up for butchered frog and rice porridge is either testament to how good it is or how far people will go to save a buck.

Adding claypot frog to the list of food to tackle while in Singapore seemed like a good idea in theory as I sat in my living room, in Taiwan, munching on Doritos while hustling the internet for food tips. Look how cultured I am!, I thought, wiping bright orange tortilla dust on the couch pillows. However, when the clay pot was finally placed on the table–right under my nose–it took a solid dose of self coaching, a la trying-everything-at-least-once, before I could take the first spoonful.

Tender bits of bone-in frog meat swirl in a rich, dark soy sauce with green onions and (at least in the spicy version) dried red chilies. I peek at the many tables around us to see how others were eating their frogs. Do I toss a few pieces into the rice porridge and scoop it all out together? Do I go at it bones-in-hand like chicken wings, using the steamy porridge as filler in between bites? should I use chopsticks or a fork? Did that woman just order lemonade?

While similar in taste to dark meat chicken, the texture is closer to what you might expect from clams or mussels. That’s not a slam. I’m game for clams and mussels any day of the week. I had a difficult time, however, convincing myself–despite being solid tasting meal–that all those tiny bones nestled in the pot didn’t matter. Which is to say that I had a difficult time convincing myself the frogs I was eating weren’t the same slimy creatures I used to collect in buckets and store under my bed when I was eight years old. Cultured traveler or not, mind trumped matter on this one.

Would I order claypot frog again? Sure. Would I absolutely crave it next time I’m in Singapore? Probably not. Would I recommend it? Without a doubt. We hit Geylang Lor 9 Fresh Frog Porridge (SGP $8/$16/$22, plus $2-$4 for rice porriage) and had to grab a table at the back of a crowded alley full of diners, but there’s some dispute amongst foodie netizens over rather it’s them or the one of several other places in Geylang that churn out the best frog.